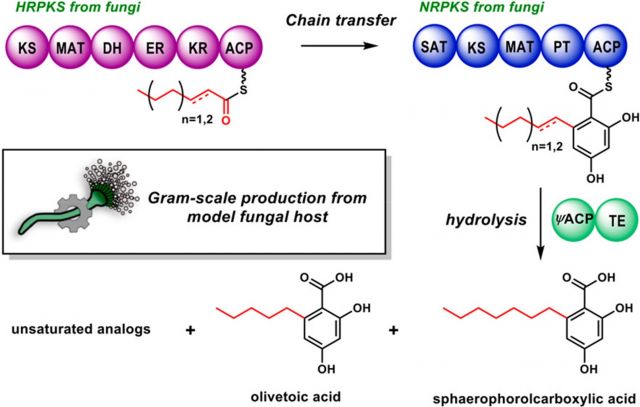 Proposed biosynthetic pathway of olivetolic acid and its analogs from Metarhizium anisopliae ARSEF23.

A new strategy has been developed to produce olivetolic acid (OA), a precursor in the cannabinoid biosynthetic pathway, using microbes, instead of relying on plant extracted enzymes. The novel platform uses a set of tandem polyketide synthases on the model organism Aspergillus nidulans that leads to higher OA titers and a flexible engineering pathway to access rare or unnatural cannabinoids.

Importance of the Achievement

The new set of enzymes will enable new synthetic biology strategies to access microbial cannabinoids, including rare cannabinoids without relying on plant production. Cannabinoids have shown promise as pharmacological agents and there are many ongoing clinical trials testing the effects cannabinoids have as antidepressants, analgesics, anticonvulsants, antiemetics and in the treatment of cancer cells. In comparison to the previously established plant pathway production of OA, the main precursor for cannabinoid synthesis, this biosynthetic pathway provides increased production, diversity, and selectivity. This platform has the potential to not only produce common cannabinoids like ∆9 -tetrahydrocannabinol (∆9 -THC) and cannabidiol (CBD) but also rare and potentially more potent cannabinoids due to the diversity of analogue products produced.

Unique Features of BioPACIFIC MIP that Enabled this Achievement

Financial support for materials and researchers. This project serves as a precursor to work that will leverage the Living Biofoundry facility at BioPACIFIC MIP.